The Wishing Well was once the focal point of a garden on the grounds of the Frank C. Ball home. It was purchased in Venice by Mr. and Mrs. Ball. The maker is unknown. Following the 1967 fire, the Wishing Well was moved to the home of Alexander and Rosemary Ball Bracken in Westwood. Mrs. Bracken was the daughter of Frank C. and Elizabeth Brady Ball.

After Mrs. Bracken’s death, her Westwood home was given to Ball State University for use as the university president’s home. The bronze Wishing Well was given to Minnetrista in April 1998. 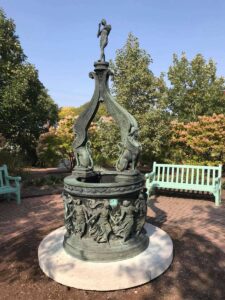