Located in the floodplain along the southern boundary of the Westside Neighborhood, Westside Park serves over half of Muncie’s community. Westside Park has a little league sized baseball diamond (also used for softball leagues), basketball courts, vast amounts of openspace for spontaneous play, multiple picnic shelters and picnic tables, a playground, a shuffleboard court, restroom facilities and a drinking fountain, and three wirecontrol airplane circles. Two of the basketball courts were created by converting tennis courts. Large mature trees are throughout the property. The White River forms the southern boundary of the park, providing the opportunity for bank fishing, and viewing wildlife. Westside Park has seen multiple improvements in the last 5 years. The basketball courts were resurfaced and a new parking lot was installed on the west side of the courts. Several trees were planted in open space north of the playground. The White River Greenway was extended past Westside Park, linking this park to several neighborhoods, with new parking areas and a turn-around constructed as a part of the greenway improvements. Greenway was also installed in the west half of the park along White River Blvd. 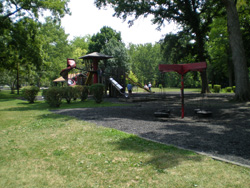