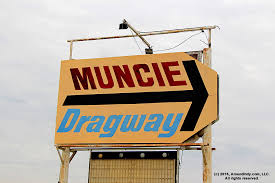 The track opened opened on July 3, 1960.  It is located six miles northeast of Muncie on Highway 67. Prior to June 1961, Larry Miller held the strip record at 164 MPH. On October 8, 1961, featured racers included Mickey Thompson and Chris Karamesines. Match racers were brought in regularly in the 1960s to draw crowds. In summer 1963, it was running every Saturday night. It was sanctioned by NHRA in the 1960s, but switched to IHRA in the early 1970s. In the 1970s, it was called Muncie Mid-America Dragway. On Juy 21-22, 1973, the track hosted the IHRA World Record Championship Drag Races with a $20,000 purse. In late 1979, Jerry Runyon sold the track to Dr. Ross Egger and Norman Day. They renamed it Muncie International Raceway and made a number of improvements including a large concrete starting pad. They stayed with IHRA sanctioning. Today it is an NHRA-sanctioned track with the quicker cars being timed for 1/8th-mile and sportsman cars running the full quarter-mile.