Muncie has had a lot of national recognition over the years. Here is a list of the 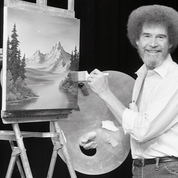 Famed American painter Bob Ross filmed his weekly half-hour “The Joy of Painting’ show at TV station WIPB – PBS in Muncie from 1984 until the show ended in 1994. The show still airs today in syndication and on Netflix. In October of 2020, the Bob Ross Experience will be a permanent attraction to showcase his art, videos, and his studio. Ross died at age 52 in 1995.

Jim Davis, cartoonist and creator of the comic strip Garfield, graduated from Ball state University and had his PAWS, Inc. office in Delaware County for decades.  There are statues of Garfield around the community along with a Garfield gift shop at the Muncie Visitors Bureau.

Late-night talk show legend David Letterman began his entertainment career in Muncie when he attended Ball State University from 1965-1969. He hosted an on-campus radio show on WBST called Make It or Break It in 1965, but that rock ‘n’ roll radio gig only lasted a week, playing the worst songs he could find and concocting fake news stories. Today, gracing the Ball State campus is a David Letterman Communication and Media Building. Dave always wanted a street named after him…check out “Dave’s Alley” in downtown Muncie.

The well-known Ball Corporation that produces glass jars and lids for home canning began its long history in Muncie, starting its operation in 1889. Today, the company is headquartered in Broomfield, CO, but there are many collections throughout the community and a Ball Jar Collectors convention come to Muncie every year.

5. Muncie in the NFL

Muncie was one of 11 charter members of the National Football League that formed in 1905. The Muncie Flyers played in the NFL for 20 years before going bankrupt after the 1925 season.

General Motors outfitted many of their muscle cars from 1963-1975 with a hopped-up transmission called the Muncie 4 Speed, named for the manufacturing plant in Muncie where it was created. The Muncie 4 Speed became legendary and went into cars like Chevy Corvettes, Camaros. Pontiac Firebirds and Trans-Ams.

The NBC sitcom “Parks and Recreation” ran from 2009-2015, and starred Amy Poehler, Nick Offerman, Chris Pratt, and Rob Lowe. The popular show was about the antics of a fictitious city in Indiana (Pawnee, IN) and their public officials as they pursue sundry projects to make their community a better place. The city Pawnee was based off of and has many reference to Muncie. Even the city map was created from the current Muncie map.

7. Close Encounters of the Third Kind

This 1977 blockbuster film takes place in Muncie, where local residents encounter aliens in the dare of night from their farm outside of the city. As the story unfolds, “Muncie” touches fill the screen, from Richard Dryfuss wearing a Ball U t-shirt, looking for Cornbread Road to Muncie police cars chasing UFOs. Although there are a lot of reference to Muncie, the scenes were filmed in Mobile, AL and Wyoming.

Tom Slick is the cartoon tar of a series of shorts that aired within the half-hour animated television series George of the Jungle (1967). It was the work of Jay Ward Productions, the creators of Rock & Bullwinkle and other satiric animated characters. During these timeless cartoons, Tom Slick had several auto races in Muncie, IN. There is also a pun for the Indianapolis 500 (just 45 miles from Muncie).

In 2007, the reality show Armed & Famous was filmed in Muncie. 5 celebrities went through training to become police officers. Former CHIPs TV star, Erik Estrada was one of the celebrities that went through real training for the Muncie Police Department. Joining him on the show were La Toya Jackson, Jack Osbourne, Trish Stratus, and Jackass TV star, Jason “Wee Man” Acuna.

McCulloch Park was the home to several local semi-pro clubs. Muncie fielded its first professional baseball team, the Muncie Fruit Jars in 1906. After WWII, the Cincinnati Reds established a minor league affiliate in the city, called the Muncie Reds (1947-1951)