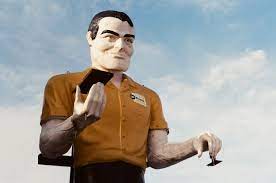 This is a “Muffler Man,” a large fiberglass sculpture of a man used as advertising. Hundreds of these, advertising a variety of businesses, were once seen along highways in the United States. The statues became known as Muffler Men because many early ones advertised muffler or car repair shops. They were made from the early 1960s until the mid 1970s.

This stands in front of McAllister Rentals at 3500 N Lee Pit Rd, Yorktown. this is located at Exit 241. Just northwest of the Exit. This statue was originally built for Jack Smith’s RV, and originally held a miniature Winnebago motorhome in his outstretched arms. 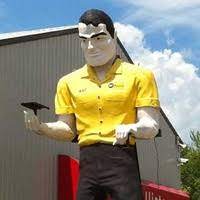