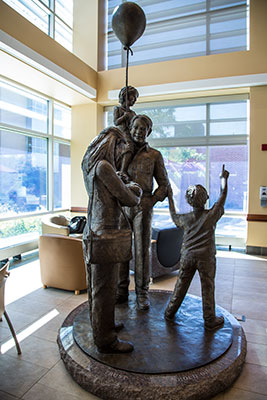 Steve was an artist, a loving father and beloved husband. He was born October 25, 1954 in Bemidji, Minnesota, moved to Indiana at age 6 where he attended public school in Yorktown and Muncie, and graduated from Burris Laboratory School in 1972. Steve’s early talent and passion for the arts was nurtured through his family, artist friends, and unique opportunities (such as working at the Bethel Pike Pottery as a teenage intern) attributing to his love of the sculptural form.

After graduation Steve moved to Vermont with his family. He attended The Art Students League (ASL) of NYC for 4 years where he continued to enhance his creative talent. Steve spent 24 years in NYC and upstate New York creating sculptures in bronze, stone & clay. During this time he also privately owned and operated a sculpture business that provided hands-on technical services for other artists.

In 1996 Steve moved back to Muncie, Indiana where his artistic roots began. He was a member of the Indiana State Council of Plasterers and Cement Masons Union from 1998-2005 but continued creating sculptures in his art studio. Of particular note,