William H. & Agnes Metzger Ball built one of the first homes in what became known as Westwood, a housing development in west Muncie. In 1939, the Balls attended the World’s Fair in New York. There they saw a wrought iron gazebo which was designed by an artist working for the Nashville Foundry in Nashville, Tennessee. The gazebo won first place in the category “Best Cast Iron Work of Art” at the fair. The Balls purchased the gazebo. The gazebo was given to Minnetrista and is now the focal point of the rose garden. 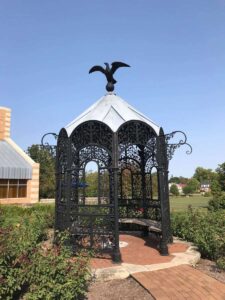