The bronze sculpture of the chubby-cheeked little girl dangling two frogs by their feet and smiling up at the sky has become legendary at Ball State over the years as a good luck charm and a popular meeting place.

She was cast by the late American sculptor Edith Barretto Stevens Parson (American 1878-1956) between 1917-37. Muncie industrialist Frank C. Ball donated the sculpture, and she resided in the Ball State University Museum of Art for many years.

In the past, campus legend had it that if you rub her nose, you would have good luck on your next exam. However, with so many students caressing her nose, she became damaged and was packed away.

In 1993, Frog Baby was restored and placed in the middle of a fountain built on the north side of Bracken Library. The fountain is dedicated to the late Alexander M. Bracken, son-in-law of Frank Ball and a key player in Ball State’s rapid growth after World War II.

No one rubs her nose anymore, but students sometimes bundle her up with scarves and hats in the winter. 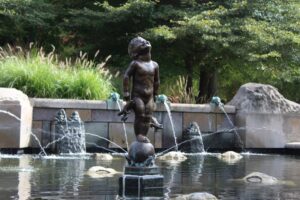