When Hermon Lee Ensing of Philadelphia died in 1899, founder of National Humane Alliance, he bequeathed money to place throughout the United States a series of water fountains for animals. By 1911 about 130 fountains had been erected in cities in 44 states. The granite fountains featured a bowl from which horses could drink as well as water spouts near the ground for dogs and cats. Originally placed at Five Points (Ohio, Kirby Macedonia, Burlington and Windsor) it was restored and moved to Heekin Park and rededicated in 1971. 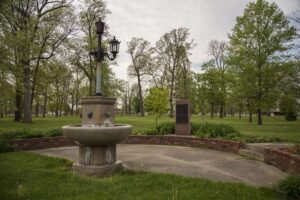