Emily Kimbrough was born in Muncie, Indiana on October 23, 1899 and died February 10, 1989 at her home in Manhattan. In 1921 she graduated from Bryn Mawr College and went on a trip to Europe with her friend Cornelia Otis Skinner. The two friends co-authored the memoir Our Hearts Were Young and Gay based on their European adventures. The success of the book as a New York Times best seller led to Kimbrough and Skinner going to Hollywood to work on a script for the movie version. Kimbrough wrote about the experience in We Followed Our Hearts to Hollywood.

Kimbrough’s journalistic career included an editor post at Fashions of the Hour, managing editorship at the Ladies Home Journal and a host of articles in Country Life, House & Garden, Travel, Reader’s Digest, Saturday Review of Literature, and Parents  magazines. Kimbrough’s Through Charley’s Door (published 1952) is an autobiographical narrative of her experiences in Marshall Field’s Advertising Bureau. Hired in November 1923 as the researcher and writer for the department store’s quarterly catalog, Fashions of the Hour, Kimbrough was later promoted to editor of the publication. In 1926, she was recruited by Barton Curry with Ladies’ Home Journal, and left Marshall Field’s to become Ladies’ Home Journal’s fashion editor, a position she held until 1929. Between 1929 and 1952, Kimbrough was a freelance writer, with articles published in The New Yorker and Atlantic Monthly among others. In 1952, she joined WCBS Radio.

The Emily Kimbrough Historic District is a historical neighborhood in downtown Muncie, Indiana. https://www.facebook.com/EmilyKimbroughHome Established as a Muncie local historical district in 1976, it was eventually added to the National Register of Historic Places on November 13, 1980. The District was named after the author and journalist, who spent much of her childhood in the District. Her former home, located at 715 East Washington, is still standing today. Muncie and her old “East End” neighborhood are reflected in much of her writing. Most houses in the District were built after the discovery of natural gas in 1886; citizens who profited from the natural gas enterprise built many of the houses. The District soon became the neighborhood of Muncie’s socially elite and prosperous citizens. In the late 20th Century, the city of Muncie began redeveloping the downtown area and also began restoring the historic neighborhood. Many homes in the District have now been renovated and restored to their original state. The District remains a significant part of Muncie history and culture. Since 1976 the East Central Neighborhood Association in Muncie, Indiana, has sponsored the Old Washington Street Festival. The Festival is held annually in the neighborhood, promoting the historical gas boom days and the unique architecture of the homes. The festival offers house tours of the many homes in the District 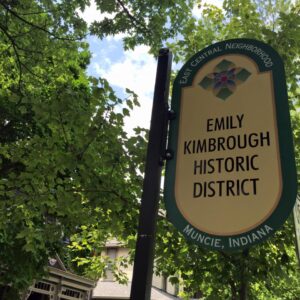 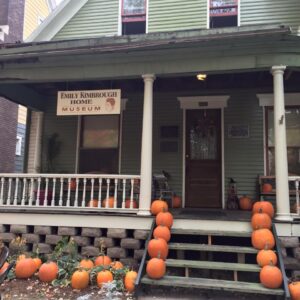