For over 80 years on campus, this bronze statue has become the symbol of Ball State University. It was the last commissioned work of renowned sculptor of his time Daniel Chester French (American 1850-1931), best known as the sculptor of the Abraham Lincoln statue in the Lincoln Memorial in Washington, D.C. The settings and columns for Beneficence were designed by prominent East Coast architect Richard Henry Dana.

The statue was commissioned by the Muncie Chamber of Commerce as a public monument to the generosity of the Ball brothers, each of whom is represented by one of the five Corinthian columns. The bronze statue was completed in 1930 and installed in 1937. 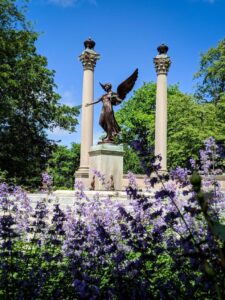