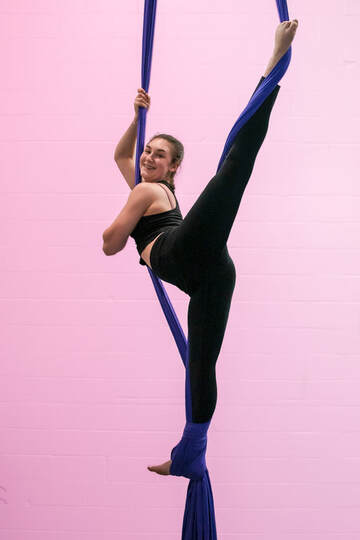 The Aerial Annex is Muncie, Indiana’s only aerial silks studio.  Aerial Silks combine dance, acrobats and flexibility while moving gracefully through the air. This decades old form of circus performance is quickly becoming more popular across the US as it is becoming widely accessible to larger areas of our population.

​We are excited to bring this creative and artistic form of movement to the Muncie area and be able to spread our enthusiasm for the sport with many others!

The only aerial arts studio in Muncie.
We have classes for all levels from beginner all the way through advance. We also have youth classes available for ages 9-14.
Everyone, other than those attending the youth classes, are required to complete an “Intro to Aerial” class before moving on to Level 1 Silks.
We are located inside of the MadJax building, downtown Muncie. You may enter through the south door of the building.
765-620-1252     http://TheAerialAnnex.com/ 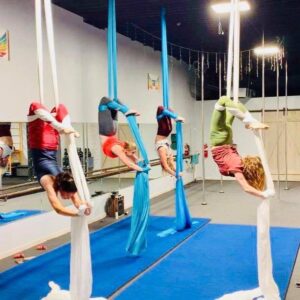 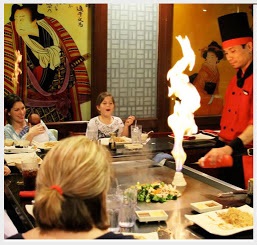 Located at 1705 W Mcgalliard Rd, Muncie, IN 47304, our restaurant offers a wide array of authentic Japanese Food, such as Chicken Teriyaki, Hibachi Steak, Seafood Yaki Udon, Spicy Salmon Roll, Shrimp Tempura Roll.
Try our delicious food and service today. Come in for a Lunch Special or during evenings for a delicious dinner.
If you have any suggestion to our food or service, please go to the customer feedback page and leave us your suggestion or review. We will respond to your suggestion as soon as possible. 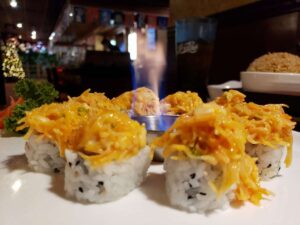 Ball State University in Muncie, IN

Top-ranked academic programs make Ball State University one of the best in the Midwest. Ball State has grown into a world-class university with highly respected programs in education, architecture, business, communications, fine arts, sciences and humanities, and the health professions. Seven academic colleges featuring some of the most advanced educational facilities. Residence halls that combine emerging technology with environmentally friendly design. Athletic venues that host NCAA Division I teams. Libraries. Food courts. Not to mention landmarks such as Beneficence, Shafer Tower, and Frog Baby. There’s a lot to take in on the vibrant campus. The best way to experience it all is to schedule a visit. Or take our virtual tour to see highlights online, including 360-degree views of the student recreation center and residence hall rooms.

Whether you are coming here as a student or settling here long-term, Muncie and Delaware County offers some of the most affordable housing in the country. Plus, the community has a variety of dining, shopping, and other entertainment and cultural attractions throughout the year.

Muncie, population of about 70,000, is home to cultural and recreational amenities such as the Minnetrista, Cardinal Greenways, Prairie Creek Reservoir, The Academy of Model Aeronautics, and Muncie Civic Theatre, plus many opportunities on campus like the David Owsley Museum of Art, Marilyn K Glick Center for Glass, Rinard Orchid Greenhouse, and Emens Auditorium. The city ranks as the most affordable place to live in the U.S., according to Realtor.com, and the Indiana Chamber of Commerce has twice recognized Muncie as the Community of the Year.

For information on Muncie visit: https://www.visitmuncie.org 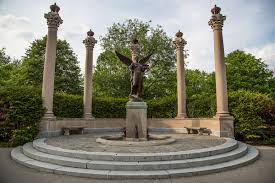 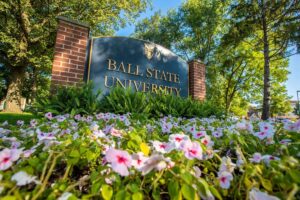 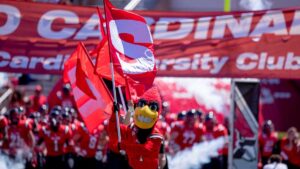 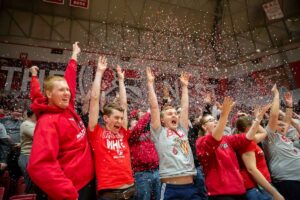 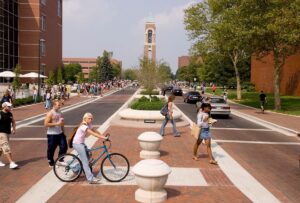 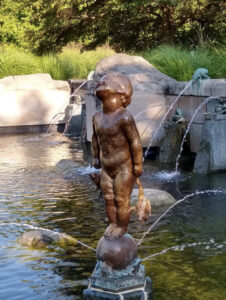 Are you looking for an authentic Thai restaurant? Look no further than the Thai Kitchen. Located just south of the downtown, in the south central area. Food is always great, good prices, and very friendly atmosphere. Appetizers, soups, salads, rice, stir frys, stews, and desserts.  Dine in or carry out. 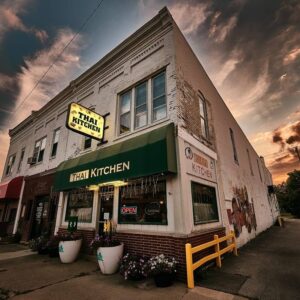 Pawnee, Indiana is the fictional setting for the TV show, Parks and Recreation. Parks and Recreation premiered on NBC in 2009 and ran for 7 seasons with 124 episodes.  The show follows the adventures of the local parks and recreation department employees, led by Deputy Director Leslie Knope (played by Saturday Night Live alum, Amy Poehler). “Muncie is a lovely city.” – Leslie Knope

There are a lot of people that think Pawnee is based off of real cities of Indiana. In the TV show, the city is said to be located about 95 miles south of Indianapolis and 120 miles southeast of Terre Haute with a combined population of 80,000 people. The map of Pawnee is actually a map of Muncie, but turned upside down and flipped. The show even modeled Pawnee’s city government after that of Muncie and Bloomington, IN.

In Parks and Recreation, Pawnee has a city slogan of “First in Friendship, Fourth in Obesity”. Fourth in obesity as in the entire country. One of the local factories employs one-third of the city, the Sweetums Candy Factory. The most popular restaurant in Pawnee is Paunch Burger. In the “Soda Tax” episode, they introduced a 512-ounce drink called  “child size” because it was roughly the size of a liquified child.

There may not be 512-ounce sodas in Muncie, but the two communities do have some things in common. This is not the first time Muncie has been modeled as a typical midwestern town. It was featured in sociological studies, in movies, cartoons, and other pop culture.

Jerry/Larry/Garry Gergich, a character on the show, loves his favorite vacation spot…Muncie, were he and his family has a timeshare.