The statue, owned by the City of Muncie, is a memorial to Edmund B. Ball. After his death in 1925, his family searched for a suitable memorial to him. They settled on a replica of the “Appeal to the Great Spirit” cast in bronze, and erected on a site just east of the Ball family homes on the north side of the White River in Muncie. The original sculpture was created by Cyrus Dallin in 1909 and is a Plains Indian. The statue and surrounding park were dedicated in 1929. The statue is located in a park at the corner of Walnut St. and Granville Ave. 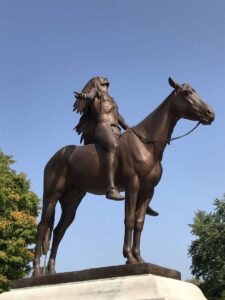